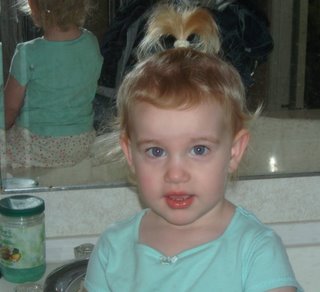 Where have two years gone??

Yes, we made it to the reenactment today. I'd hoped to have some really cool shots to share from that, but I'm still getting the hang of a digital camera we're thinking about buying, and some of my coolest shots didn't "take"! Grr.

And if I'm going to do these things, I really must learn to wear a hat. (I need one of those shallow-brimmed ones that women wore during the 17th and 18th century, the kind that accommodated hair in a bun as I usually wear mine.) I was standing out there today thinking about the brilliant Continental general Nathaniel Greene ("the Fighting Quaker"--another story I'd love to explore in detail!) dying of heatstroke just a few years after the war ended ... and no wonder. I have a headache tonight from the intensity of our late-summer sun.

Maybe it's just my brain exploding from all this research.

The group out there today (it was a small event, but still fun) represent the Jaeger Corps, Hessian mercenaries the British hired as elite anti-sniper troops. Since the event was in honor of a skirmish (really an ambush) between Francis Marion's men and a combined force of British regulars, Jaegers, and dragoons, the reenactors split themselves between the American and the British side, and had fun blasting black powder while pretending to shoot each other. My boys thought the cannon fire was wonderful.