And the research continues ... 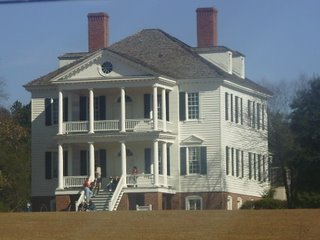 I've hit another stretch where I feel like I have nothing worth saying publicly. (That, and it seems impossible to sit at the computer long enough to write a post lately ... this one took me all day.) I did finish the first volume of the 4-book set I bought at the Camden reenactment (and isn't that a kewl photo by my daughter of Historic Camden's Kershaw-Cornwallis House?) and am well into volume two.

This series is called Nothing but Blood and Slaughter, and covers the entire Revolutionary War in the Carolinas, 1771-83. The title seems overly dramatic and gruesome until one begins to realize just how awful the war was in this part of the country--not just in the aspect of usual "Patriots vs. British" but in "partisan" fighting, i.e., the bitter and vengeful conflict between Loyalist and rebel colonists, many of whom were neighbors and, in some cases, family members. Vol. 2 alone covers 1780, the year my story starts, and almost 100 pages are devoted to the Siege of Charleston, which spanned March to May. Several times I found myself getting caught up in the suspense and drama, even though it's merely straight narrative and I know ultimately how everything ends--Charleston falls to the British. But I'd never read a detailed account and hadn't fully realized what a long and nasty affair it was. When Benjamin Lincoln of the Patriot forces initially considered surrender (or evacuation), the townspeople and militia were incensed and threatened to attack Lincoln and the Continental forces themselves if they left; but by the time it was all over with, the townspeople were begging for surrender under any terms. Lincoln was quite frustrated, and understandably so.

While cross-researching a particular location, I ran across a diary excerpt by Sarah Gibbes, wife of a Charleston plantation owner during the American Revolution. This one line in the middle of the excerpts jumped out at me:

Gracious God. grant me O! grant me Consolation; and resignation to thy divine will

The language might be a bit on the archaic side, but the sentiment is just what I've been struggling with over the past weeks--no, months. While reading about Sarah's experiences and the poetry through which she works out her grief over the death of a beloved stepdaughter, I reflected that our struggles to surrender to the Lord's will and trust His ways truly are universal--across all times and generations:

Take all, great God! I will not grieve,
But still will wish that I had still to give;
I hear thy voice, thou bidd'st me quit
My paradise, I bow, and do submit:
I will not murmur at thy word,
Nor beg thy angel to sheath up his sword.
October 5, 1782 S Gibbes…

And I see that women have always depended upon the support of other women:

A friend sincere will kindly treat
Each woe that racks the mind
The sympathetick tear will beat,
Where friendship's band's conjoin'd.

Dividing this the load of grief,
Life's ceaseless care is less;
Her soothing converse yields relief,
Her pity can redress.

God is truly enough in and of Himself to meet our every need ... but we believers are His hands and feet, and sometimes He meets our needs by the voice and touch of a dear friend.

How wonderful to feel a sense of understanding with the woman who wrote these words almost 225 years ago ... and to find this example of a genuine, active faith contemporary to my research.
American Revolution faith reflections research