The Irony of History, Part 3

November 11, 2006
I’ve had a few difficult days this week … “invisible” days I could call them, in reference to that freaky dream a few weeks ago. Wednesday was better, strangely enough … it was my 40th birthday, and turned into such a neat time to reflect on God’s mercy, and life in general.

Never mind that it was the day after elections. I’m not sure what I have to say about that would please anyone … besides the fact that God is in control, and that nothing takes Him by surprise.

I hate politics. Economics and politics both are subjects that most of my life have been guaranteed to make my eyes glaze over. And wouldn’t you know, both are essential to anyone wanting to do any sort of decent worldbuilding. So, the last few years, along with studying the writing craft more seriously, I’ve been trying to pay more attention to them, at least in a historical context, to help me in planning my stories. I’ve seen some modest growth in understanding both.

In July, of course, I started seriously researching the Revolutionary War era, and suddenly things began to “click,” especially in the area of politics. I started seeing similarities between things that were said and done during that time, and what goes on now. The reasons behind the American Revolution were suddenly fascinating to me, and I already posted some of my musings (see The Irony of History in the Sept 06 archive) about how the research has made me question how I was taught history. 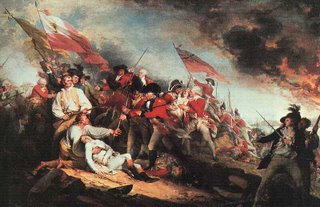 One of my resources is Redcoats and Rebels: The American Revolution Through British Eyes. The book has been an absorbing read, covering not only tactical details of major events and battles such as Paul Revere’s Ride and the Battle of Bunker Hill, but all the nuances of politics that led up to the Revolution, and the background, temperament, and personal lives of various figures. I finished it last week. Saturday I took the kids to Camden, SC, to the annual Revolutionary War Days event, at the site of the original town of Camden and the house that General Cornwallis used as his headquarters in 1780. I picked up a set of four books, written by one of the reenactors, that attempts to cover every detail of the war in the Carolinas, from 1771 to 1783. More to read before I can start writing.

I’m finding, though, that what I’ve taken in so far has made me view the aftermath of this election a little differently than I might have. Maybe it’s harder to be alarmed, after observing the natural rise and fall of political tides over hundreds of years. People argue that our times are different—I’m not so sure. We certainly have more leisure as a culture to absorb ourselves in entertainment, but as far as being more immoral? Sin may seem more blatant now, but it was always there. Things were just kept hidden, not necessarily because of how shameful certain acts were considered in and of themselves, but because of the discomfort of recognizing and confronting them. The divorce rate was lower, but adultery was just as rampant—and women often held the attitude that “a lady doesn’t speak of such things,” and that “men will be men,” so they made their husbands’ behavior socially acceptable by turning their own heads and ignoring what took place. More on that later.

I’ve commented more than once in the past few months that at least in our culture, we see what we’re dealing with—but one thing that still does not get addressed is the difference between sins of the flesh and sins of the spirit. One is more visible—ever notice how it’s the unmarried pregnant girl who carries a baby to term that received the stigma for her sin, but the girls who engaged in sex before marriage without being “caught” (or perhaps had an abortion—and never think that abortion is only a modern issue) are viewed as still moral, because they don’t visibly carry the evidence of what they've done. This is also seen in the way that history has only valued the girl’s virginity—because of paternity issues, I’m sure—but expected boys to fool around. But that girl who chooses to have the baby—she is humbled, shamed for what she’s done—while those who seem to get by with the same thing only increase in their pride. Who is truly in the worst spiritual state before God? Who is most in need of Christian compassion, and dare I say it—approval?

I wonder if it isn’t often the same in politics. I’m not suggesting anyone support a particular party over another. My husband teases me about being “liberal,” but I do vote according to issues—I’m not sure I could knowingly support a candidate who is for legal abortion, for instance, and I have very strong personal reasons for that. But still—I wonder if Christians don’t get so hung up over issues, that we forget matters of the heart and spirit. Where do the candidates stand before God? What is their attitude toward faith in God? Are they humble about their own mistakes, or do they scramble to rationalize and defend themselves when a scandal is uncovered?

And furthermore, given the stories I’ve heard of good men who run for office with the intent of “doing great things” for the people, then find The System just too hard to work against, I wonder if it’s possible to be in politics and remain purehearted.

But then, no one is pure of heart on their own, and those of us who walk in the world are in constant need of washing our feet and garments. Some Christians seek to minimize this by separating themselves physically as well as spiritually—but I’m becoming less sure that God has called us to do that, as well. A particular passage in 2 Corinthians seems to indicate otherwise. “But when I told you to separate yourselves from the sexually immoral, I certainly did not mean from the unbelieving, for then you would have to go out of the world.” I believe that as long as the door is open for us to be involved in government, we have need of believers in Christ to do so—but we also should not forget to pray for those who are in office. Scripture says that the heart of the king is in God’s hand, to turn as He wills—and who knows what God can and will do in that arena if we all seek Him with our whole heart?

But I know one thing—we must not only pray for our leaders, but we must also live out our own faith in the everyday. And therein is my hardest struggle, at least. It's relatively easy to pray ... much harder to hold my temper and serve my family with patience and diligence.
American Revolution historical research research writing journey