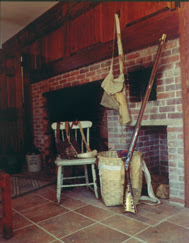 I'm sick again (not good), but spent the day in bed with my laptop, writing and researching. Oh yes, in the middle of everything else going on lately, my writing changed direction, with the accompanying squeal of brakes and grinding of gears... and I'm on page 16 of my historical. Looks like I'll have an entry for the Genesis this year, after all.

I went in search today of what firearm my hero carries. After a slight side trip to research the Brown Bess, it was suggested that he'd carry a Kentucky or Pennsylvania long rifle. Voila! An even longer side trip, before the reading on the Brown Bess, brought me back to my favorite website on Banastre Tarleton, which in turn yielded several useful details for the scenes I've been working on.

I'm starting to get used to the constant adjustments I have to make as I refine my research ... from the first it has been write a page or two, read a bit, realize certain details wouldn't work, go back and tweak and write a little more ... etc. etc. etc. This is why historical writers generally research heavily for a while before actually starting to write, but it's been six months of research now, and the story has been begging to be told. Beginning it has been, I think, the hardest thing writing-wise I've ever done ... and I thought Gift was an act of faith!

I made a very important discovery earlier this week, however, one that seems to have freed me to actually work on this thing. I took a few days to read Grace in Thine Eyes by Liz Curtis Higgs (warning: do NOT venture into this story without a towel or two or a box of Kleenex at your side), and after I finished was doing my usual reflecting on the story and why it impacted me so deeply. I realized that as emotionally involved as I’ve gotten in all the characters of my fantasy series, deep inside there is this safeguard of knowing all of it really isn’t real. (Well, one could argue from the perspective of a writer that it is, but ...) With all this historical research, however, I’m finding story after story after story that grips me emotionally—but unlike my characters, all these people actually lived and breathed. I feel almost crushed under the weight of it all sometimes.

And I want to tell all these stories ... of the newly-married girl whose husband took one side of the British/American conflict, and her brother the other ... she was caught and killed in a crossfire between the two, and later the husband and brother met and wept together. And of the Loyalist captain, Christian Huck (or Huik, depending upon the source), who despite his first name aroused the backcountry Presbyterian community against the British Crown in a way that no other had done, and whose violent and blasphemous reputation probably fueled more inspiration for the infamous Tavington of The Patriot, than Banastre Tarleton. And of the family that Henry Laurens, statesman and diplomat, married into ... father-in-law and brother were Loyalists, and his son was a prominent Patriot officer ... can you imagine the family dynamics there?

My paltry fictional characters very nearly got lost in the midst of such grand, real-life drama ... until I remembered that they themselves can be representative of those who lived and breathed.