And now for something a little different ... The Role of a Woman as Wife and Keeper at Home, Part 1 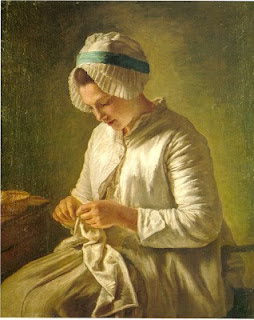 Several months ago, my mother was asked to speak at a local women's retreat. In the course of discussing what she planned to talk about, I mentioned a few very cool tidbits I'd picked up over the years about the root meanings of several terms bandied about in church circles to describe a woman's role in marriage and at home. She asked if I could write up my findings, and so I did.

Today, my good and dear friend Lee (aka Loriendil in online circles) asked me today if I had it posted online somewhere, so she could link to it. I told her not yet, but that I could correct such an oversight. So, without further ado, here in two parts is that article I wrote, with Lee's help in the final research.

“helpmeet”—a common term in Christian circles, coined to describe the role of a wife to her husband. Where it comes from: the KJV, Genesis 2:18:

And the LORD God said, It is not good that the man should be alone; I will make him an help meet for him.

Moderns have taken the separate words “an help meet” (note that Shakespearean English uses “an” before words beginning with H) and lumped “help meet” together like a compound noun. Voila! Christianese for wife. But what does it mean?

Well. “Meet” is actually an adjective, which means that it describes the word “help.” My paperback Random House dictionary tells me that “meet” is an archaic word meaning fitting or proper. So, the proper translation of that verse is something like the New King James,

And the LORD God said, “It is not good that man should be alone; I will make him a helper comparable to him.”

Then the LORD God said, “It is not good for the man to be alone. I will make a helper who is just right for him.”

Isn’t this so much nicer than “helpmeet,” which almost implies that we are an afterthought? The actual wording rather conveys a sense of worthiness—here is Man, the crowning glory of God’s creation, made in the very image of the Eternal—and God custom-designs yet another model for the express purpose of being Man’s complement and uniquely suited to work alongside him.

In digging further, I find that “help” and “meet” come from the same Hebrew word, #5838 in Strong’s Concordance, ezer which means “aid” or “help.” Hmm, so the verse could read simply, “I will make a helper for him.” And this is not a derogatory term—the Lord refers to Himself as our helper, many times in Scripture.

But there’s more. I asked a friend of mine who reads Hebrew somewhat to take a closer look at this phrase, and she and her husband dug out their commentaries and came up with this. Apparently the preposition like is prefixed to the root word ezer (a “help like him”?) and then a phrase that could be translated in the presence of or before. One source says this could be translated “corresponding to” … another dictionary says the prepositional prefix means “facing” or “opposite.” In discussing this, we concluded that this means in the sense of a counterpart … like a set … a pair … bookends. She had the image of a teetertotter, not opposite as in opposing, but counter to, where both sides are needed to make something work.

She researched a bit further. The NET Bible has this note: “The Hebrew expression literally means ‘according to the opposite of him.’ It goes into technical Hebrew stuff -- the idea is that man’s form and nature are matched by the woman’s as she complements him; together they correspond. The prepositional phrase indicates that she has everything that God had invested in him.”

Tomorrow, Part 2: exploring the meaning of "virtuous," "keeper at home," and final thoughts.

(The painting is "Woman Knitting" by Francoise Duparc, 1726-1778, chosen not only for its colonial-era setting, but the fact that she's probably darning or sewing, which I've been doing an awful lot of lately ...)
Posted by Shannon McNear at 9:06 PM