October 25, 2008
I'm going to attempt to journal this year's conference experience ... I say attempt, because it's more than a month ago and details get fuzzy with time. :-)

First of all, I flew in a day early and left a day late because I have family in that part of the country (Minneapolis, Minnesota) and couldn't NOT go see them after traveling so far. AirTran rearranged their schedules after my two traveling companions and I made our reservations, and we wound up getting there early enough for a fun cookout at the house of my good friend and critique partner Michelle Griep. 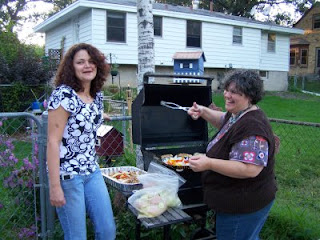 Gina Holmes and Kelly Klepfer, goofing around while Kelly cooks--and boy, can she cook! Lime chicken on the grill ... mmmmmmm mm! 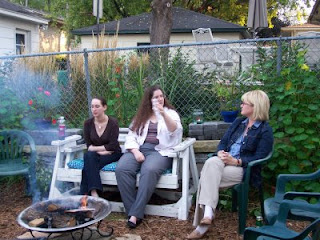 Some of you might remember that Michelle, Kelly, and I were all roomies two years ago in Dallas, along with Terri Thompson, who also came to the cookout with her husband and will appear in the banquet pics later. Others in attendance were Mike Ehret; Michelle's husband Mark and kids Josh, Callie, and Mariah; and Lisa (Elizabeth) Ludwig ... somebody let me know if there were more??