May 14, 2018
Welcome to the next installment of The Backcountry Brides settings, and welcome to Jennifer!

Deep in the mountains of western North Carolina is an area where the sun’s rays only reach the ground when it is directly overhead during the middle of the day. The Cherokee Indians called this land Nantahala, which means “land of the noonday sun.” This is where I set my Backcountry Brides novella, Heart of Nantahala, in 1757. The Cherokee built a town in Nantahala and called it Aquone, or “by the river.” It consisted of a church, a school, a post office, and a couple of cemeteries. Very little is known of the people in Aquone, as it now lies beneath Nantahala Lake, a man-made lake built in 1942 for electrical power.

In 1835, President Andrew Jackson decided to forcibly remove about 15,000 Cherokee from the eastern states of NC, SC, GA, FL, AL, TN, and marched them by military escort to a reservation in Oklahoma. This removal was gruesome, on foot, and hard on the Cherokee. Over 3,500 died on the 1,200 mile journey, which became known as The Trail of Tears. They suffered whooping cough, typhus, dysentery, cholera and starvation.

After forced removal of the Cherokee, their homes and property were confiscated and opened as homesteads to white settlers. In spite of these cruel injustices, a small band of 800 Cherokee refused to leave and hid in the Appalachian Mountains. Their descendants became known as the Eastern Band of Cherokee Indians.

They now live in the Qualla Boundary, a chunk of land that has been transformed into an Indian reservation where they have their own nation, government and laws. Most of their income is from tourism and their casinos are outlawed everywhere else in the state. If you visit the Cherokee today, they have a teepee where you can get your photo taken with a Cherokee Indian. This is purely a tourist attraction, but the truth is, the Cherokee never lived in teepees. Instead, they lived in small houses.

To protect the natural habitat of the area, the Nantahala National Forest was established in 1920, covering multiple counties with elevations ranging from 1,200 to 5,800 feet. Part of this forest merges with the Appalachian Trail where hikers flood the area in autumn during peak season and visit the many waterfalls.

The Cherokee have always fascinated me, as I can only imagine what it must have been like to be forcibly removed from their homes. What must they have endured while hiding out in the mountains to stay here in North Carolina? I believe they were strong-willed, determined, and loyal to each other. If it is true what my great-grandfather told us, that his mother was full-blooded Cherokee, I hope I have inherited that inner strength from my ancestors.

My husband's family is from the Nantahala area and I have always enjoyed visiting the beautiful mountains where my father-in-law was born and raised. In fact, I have included a photo of his ggg-grandmother. She is also from Nantahala, and to me, she looks very Cherokee.

The hills and Blue Ridge parkway call to a writer's muse. I am always inspired to write when I visit, and for a long time I’ve wanted to write a story set here. I hope you get the opportunity to read Heart of Nantahala in the Backcountry Brides novella collection.


The historical image of the woman is my husband's ggg-grandmother who lived in the Nantahala area near the Cherokee Reservation. Her name was Annis Shunk (b. 1832). I believe she is most likely Cherokee.

The photo of the two men is of my great-grandfather, Bennie Thomas Hudson, on the left. He is half-Cherokee.

The image of the log cabin is of a North Carolina Cherokee home. Contrary to popular belief, the Cherokee did not live in teepees. They built more permanent structures. 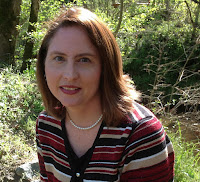 Jennifer Hudson Taylor is an award winning author of inspirational fiction set in historical Europe & the Carolinas. She provides keynotes and presentations on the publishing industry, the craft of writing, building an author platform & digital marketing.